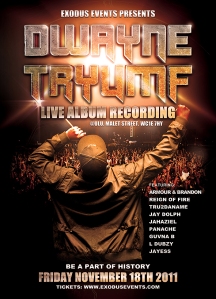 Dwayne Tryumf has announced he will be recording his new album in front of a live audience.

Following on the back of his Beginnings mixtape released earlier this year and his fantastic 777 album, his next effort will be recorded in front of a crowd in London and will bring a whole new flavour to his music.

When did you last hear a live hip hop album? Exactly! This will be a unique night and will feature a number of other British lyricists. Jahaziel, Tru2DaName, Guvna B and L Dubzy are also on the bill.

The event takes place on Friday November 18th but don’t hang around, tickets will sell quickly. Get yours now from http://www.exodusevents.com/